When my Tarot Cards first found me, it was a perfect situation. A few days before I was introduced to my deck a friend of mine had been talking to me about a deck he thought I would enjoy called The Dreaming Way Tarot. I hadn’t really had much time to research the cards but the thought had been planted.

Several days later I was in a beautiful new age shop in Saratoga Springs called Tushita Heaven… and was exploring their sale bin. Sure enough, there in the bin was an open, sample deck of cards – The Dreaming Way Tarot. 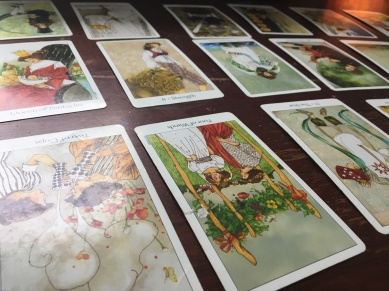 I’ve met some amazing Tarot enthusiasts. In fact, the reason I was so fascinated with the Tarot tog begin with was because a good friend encouraged me from her place of owning well over 30 different decks.

Last year while living in Virginia, I did a reading for a woman who owned over 100 different decks of Tarot cards. She knew the deck I was using… but admitted, she had no idea how to read the cards. She just loved them for the artwork.

In January I purchased a new calendar for the year and the theme was Tarot. When I opened up to the first month of the  year, I was highly impressed of the image of The Empress card for January. The deck that this card was featured from was called Shadowscapes Tarot.
I remembered that.

Yesterday, I purchased my second deck of Tarot cards in 3 years.

My 5 year old daughter and I stood in front of a massive wall of Tarot decks at Magic Moon – another awesome shop in Saratoga Springs … no samples open, and the decision to pick a new deck in front of me. I felt a bit of pressure! Then I remembered, Shadowscapes Tarot.
Sure enough they had the deck and I purchased it.

Last night, very ritualistically, I introduced myself to my new cards. As per the advice in the interpretation book, I shuffled, and pulled just one card that would set the stage for our new journey together.
The card I pulled?
The Death card.

Now Death is highly misunderstood and when I pulled this card, I laughed at the accuracy of such a card coming forth. Death is really about life, new life, transitions, releasing the old, the past – and embarking on a new adventure, a new chapter, a new deck!

I spent several hours marveling at the beauty in these cards… and the irony in them. For many months now I have been pulled to the symbol of a spiral. I use it in my own simple drawings and see it all around. The cards are full of spirals. A reminder that there is a never ending force that surrounds our lives and experience. 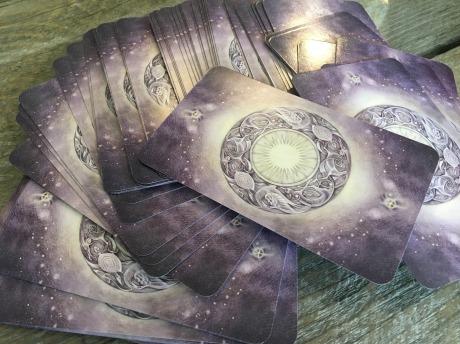 The past few days, my daughter Adelynn and I have been praying on our 4 minute drive in to school in the morning. Most mornings, we pray for sunshine. The winter months in upstate New York have been long and tiring. Even the most optimistic of us are feeling the drain without sunshine.
On the back side of my new cards, sure enough, is a big beautiful sun. Just more validation that this deck is perfect in all ways for me.

The illustrations are incredible. However, as stunning as they are, the complexity brings the cards to another level. Normally Tarot has certain themes that emanate from the picture on the card. The Shadowscapes deck is very subtle with it’s symbols, and does not work well for a reader who doesn’t know their stuff! Thankfully, the past 2 years have heightened my ability to know the cards well, upright and reversed, and most of them are secure in my mind. That being said, even I drew a few blanks as I looked at my new friends last night and could not recall what the meaning of the card was. There aren’t very obvious hints in these cards – as beautiful as they are. As a reader, they are going to certainly help me gain more solidity in my interpretations. 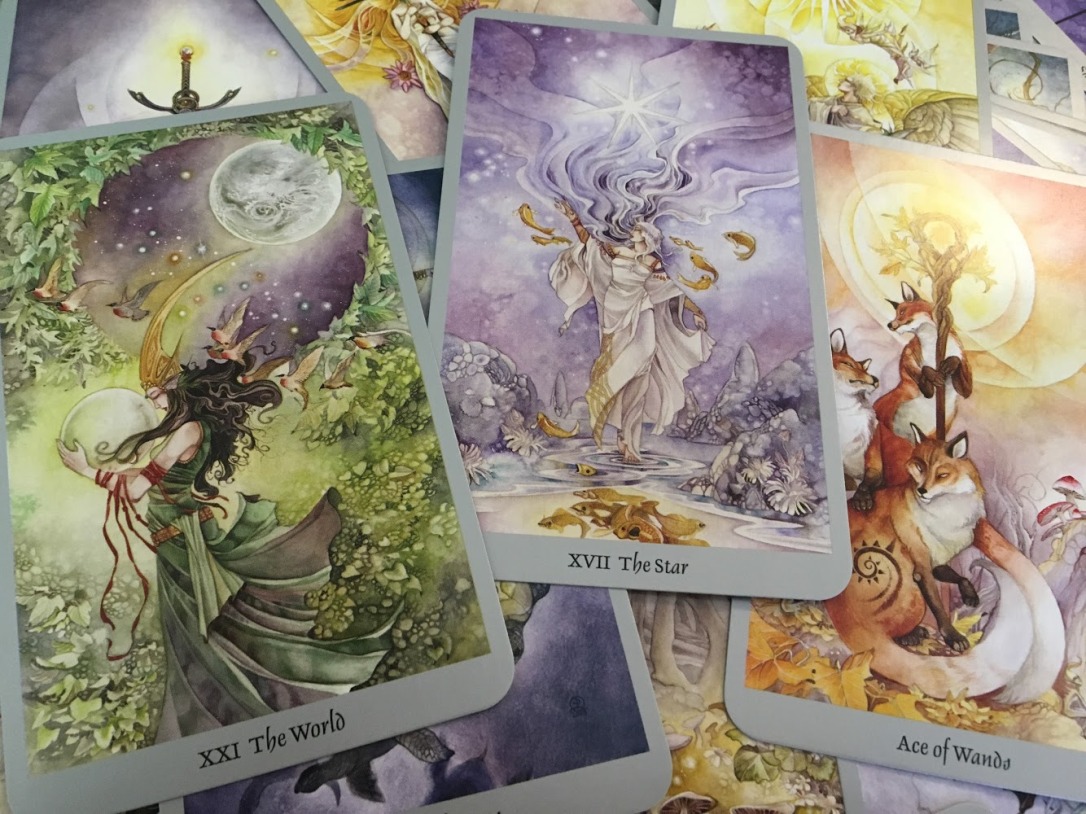 I am thrilled about the newest addition of these gorgeous cards. I feel a strong connection to them, to their beauty and messages and know that they will be one more tool for me to help others validate their path and understand what the Universe is trying to say.
Just like so many things that we surround ourselves with, Tarot is a way to hear the messages that we may be blocking. I trust that this deck will serve me and my clients well for years to come!!

Hello there... My name is Sarah! I do work as a Life Coach,Tarot Advisor and Reiki Healer... as well as freelance writing. I am the creator of Natural Peace Living, a practice that specializes in working with people who are open to creating an awesome life. I live near Saratoga Springs NY with my husband, our 2 little girls and 2 Alaskan Malamutes. I'm really interested in like minded people, Tarot cards, positive thought, meditation, the Law of Attraction, nature, hiking and the woods, mountains, travel... all sorts of awesome stuff. I'm very upbeat, caring, enthusiastic and passionate. View all posts by Natural Peace Living

“Sarah helped me to truly manifest my desires.
There are unfortunately few instances in our lives today where we fully expose our most internal desires aloud to ourselves and to others, and I have witnessed that in working with her regularly in this regard, I have helped the Universe to conspire for me.”

“My experience working with Sarah was wonderful. I found her to be caring, compassionate and quite knowledgeable. She was able to help me to better understand questions I had and as a result to find answers I needed.
Her ability to see beyond the obvious and urge me to look at things in a slightly different way made finding those answers easier.”

“Sarah is reassuring and firm and she listens. I can ramble for ten minutes straight and she listens completely and doesn’t just spit out self help advice. She asks questions and tries to put herself in your shoes so she can understand your situation – and in turn help YOU understand your situation. I HIGHLY recommend you take a minute and just chat with her. No matter where you are in life, good or bad, one conversation with this girl and your life will be forever changed.”